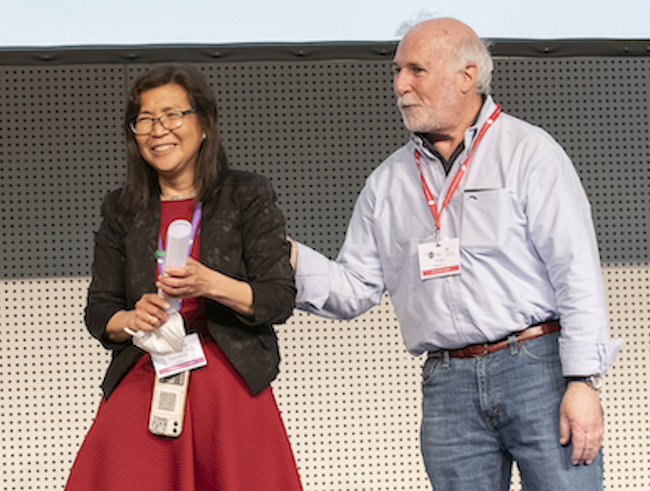 The Nick Thompson Fellowship Award is intended as recognition of service to EMWA above and beyond the normal responsibilities of the membership or elected offices.

Nick Thompson was an active member of EMWA during its early days. Tragically, Nick was killed in a car crash in the winter of 2000. At the banquet of the Montepellier conference in 2001, the President at the time, Keith Veitch, noted sadly the loss of one of our most beloved members and, with the agreement of the Executive Committee, announced the creation of the Nick Thompson Fellowship in his memory.

The award recognizes more than contributions to the EMWA curriculum and governing bodies.  The spirit of Nick Thompson is reflected in the award’s recognition of the human aspects that he so fully embodied.  Generosity of spirit, a welcoming persona, and a willingness to share the experiences and energy that infuse the organisation and its members. Professional organisations don’t celebrate 30-year anniversaries without the generosity and dedication of its long-term members.

Thus, it is a pleasure to recognize a 26-year member, Raquel Billiones, as one who has contributed to the evolution of EMWA in many ways, since becoming a member in 2006.  She has worn many different hats: including, as co-founder and co-chair of the medical device special interest group, which led to establishing the medical device education track. Medical device training has become an integral part of EMWA’s curriculum, and nearly all workshops are fully- booked, demonstrating the recognition of the value of training in this discipline.

Overall, Raquel has been heavily involved in supporting EMWA’s training program. She organized three Expert Seminar Series, a Symposium Day, and has originated and led at least 15 workshops. She has served as a workshop observer, and has been an EPDP member since 2020.

Raquel has made substantial contributions to EMWA’s journal, Medical Writing. She has been on the editorial board since 2010, has been a section editor and a guest editor of 2 issues. Moreover, she has written numerous articles for the journal and, last year, she took up the mantle as Editor-in-Chief.

In addition to these activities, Raquel is involved in numerous committee activities: she has been an Honorary Secretary for 2 years, is a co-founder of the Sustainability SIG, and is currently supporting the Ambassador program, the Medical Device CORE reference, and the Getting into Medical Writing group.

While she may be small in stature (I hope she forgives me for this), Raquel looms large in the EMWA firmament.  She makes herself available to all, and is much-appreciated for her breadth of knowledge and experience, which she shares willingly. Many members have relied on her guidance and advice over the years, and career paths have been influenced by her insights.

Raquel marshals her energy and dedication to embody the very spirit of the Nick Thompson Fellowship, and it is with great pleasure that we welcome Raquel to the Band of Fellows.

On behalf of the Nick Thompson Fellows,